Hydraulic impact or surge, appears in pipelines during the moving circulation of liquid and it is caused by sudden exchange of circulation speed (due to operation interruptions caused by power failure, sudden closing of Valve etc). The impact is followed by intensive pressure oscillations, with strong loud gusts, which often lead to failure of an entire pipeline network or some of its components.

Apart from timed valves being used, as well as different clamps, pump flywheels etc, pipelines and equipments can also be effectively protected from hydraulic impact if membrane compensation vessels are used, in this case marked as "PUP vessels“.

PUP vessels are used in installations for transportation of liquid fluids especially in systems that supply drinking and technical water (other fluids on request) and wherever indicated by project planning or in cases of hydraulic impact (surge). Vessels are defined according to the type of fluid they are used for, the size, nominal pressure, required pre-filling pressure, maximal and minimal pressures that occur during operation (with impact) and also nominal radius of the connector. PUP vessels can be installed in the open, along the pipeline route.

PUP devices are, after being assembled and prior to the operation start, filled with gas up to the required pressure as set and indicated by the design. When the network and the system are set in operation, liquid with the pressure higher than the pre-filling pressure penetrates the vessel, raising the gas pressure to the pressure of the system.

With pumps "dropping out" of the system or when the circulation is forcibly interrupted, thus making the static pressure change into the dynamic pressure and causing recurrent power on account of geodetic height rise, the fall and the rise in pressure becomes compensated for by a vessel that decreases and increases pressure by releasing air and also by taking in a part of the liquid mass. As soon as the maximal pressure has been achieved the vessel returns the excess liquid, which it had accumulated, back into the network thus causing pressure drop in it. The initial pressure fluctuation represents the first impact oscillation that is permanently registered by the vessel manometers as maximal and minimal pressure. A series of muffled oscillations follow until the system resumes its normal functioning. 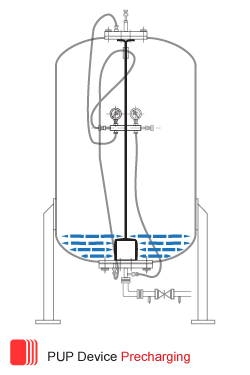 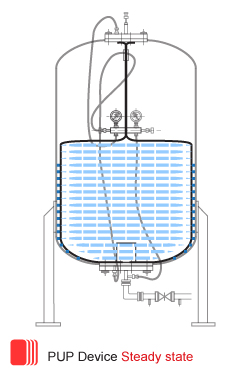 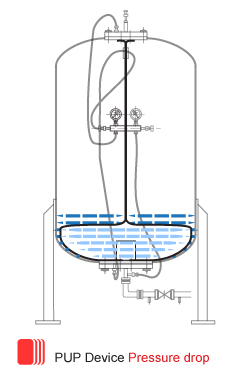 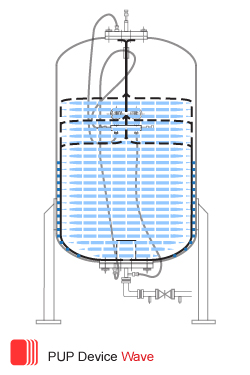 The vessel contains a connecting gate through which the vessel is being filled and refilled with air, control panel with manometers, reinforced hoses used for connecting the panel to the vessel and water indicator for control of the water level in the membrane. If required the vessel can get an automatic level control installed which, if necessary, can block the pumps operation. Connecting mode is described in figure 2. 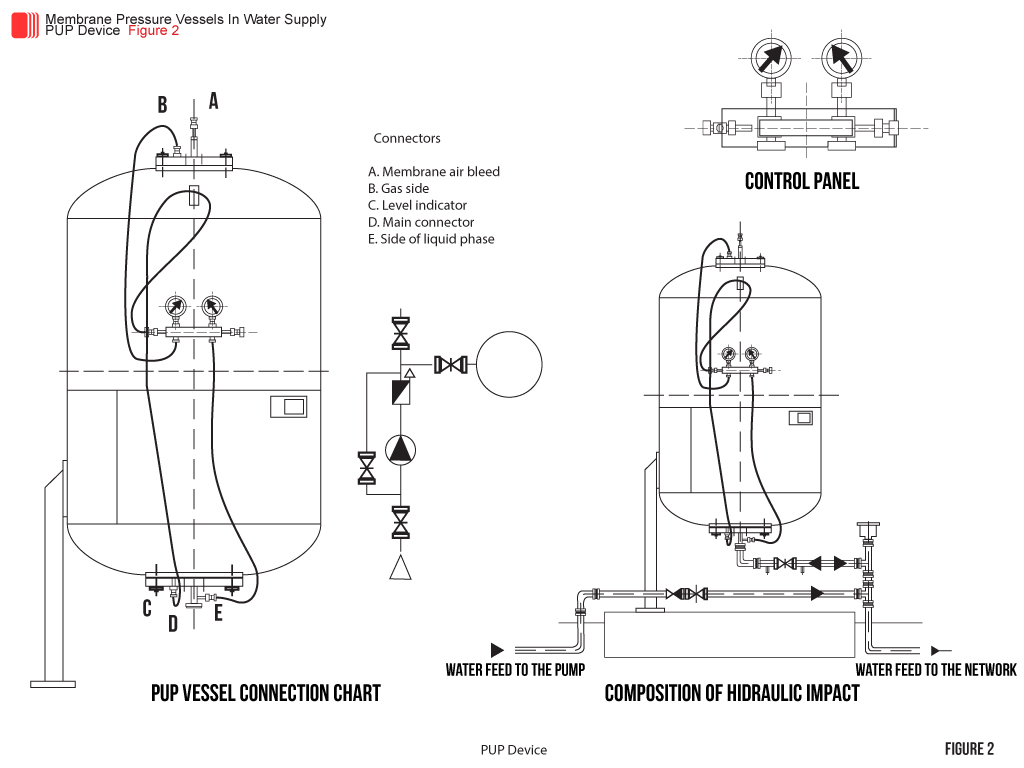 The choice of size and nominal parameters for these counter impact devices is determined solely through a project analyses for a particular network, its part and configuration.

By using PUP devices following advantages and benefits are:
– does not require additional external energy,
– can be installed indoors, outdoors and anywhere where local protection against water hammer is needed,
– maintenance costs are minimal,
– container does not allow interruption the water line (vacuum pipeline),
– membrane is interchangeable,
– longer lifetime in service.